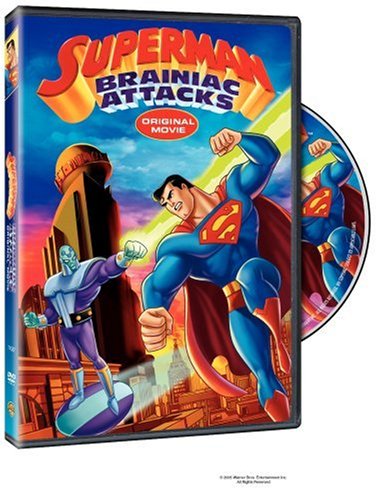 Embittered by Superman’s (voiced by Tim Daly–“The Nine”) heroic successes and soaring popularity, Lex Luthor (voiced by Powers Boothe–“Deadwood”) forms a dangerous alliance with the powerful computer/villain Braniac (voiced by Lance Henriksen–Appaloosa). Using advanced weaponry and a special strain of Kryptonite harvested from the far reaches of outer space, Luthor redesigns Braniac specifically to defeat the Man of Steel. But when Braniac betrays Luthor and reveals its sinister plans for world domination, Superman must brave the mysterious Phantom Zone to find the strength to survive this deadly showdown.

]]>
The direct-to-DVD animated feature Superman: Brainiac Attacks pits Superman against two of his longest-running foes: Lex Luthor and the robotic Brainiac. Luthor’s scheme is to re-jigger Brainiac’s configuration using a combination of Superman’s DNA and a rare form of Kryptonite to make him an unstoppable weapon against the Man of Steel. Fans of TV’s Superman: The Animated Series will be pleased to note the return of Tim Daly and Dana Delany, who reprise their roles as Superman and Lois Lane from the show, but hardcore Superman/Justice League Unlimited viewers may regret the loss of Clancy Brown’s formidable performance as Luthor (who is voiced here by Powers Boothe), as well as Corey Burton as Brainiac (here handled by Lance Henriksen). Also missing is the series’ adherence to its DC Comics origins and its serious tone, which here is blunted by Duane (The Batman, Jackie Chan Adventures) Capizzi’s frothy script, which hews closer to a combination of the Superman films and broad comedy. –Paul Gaita