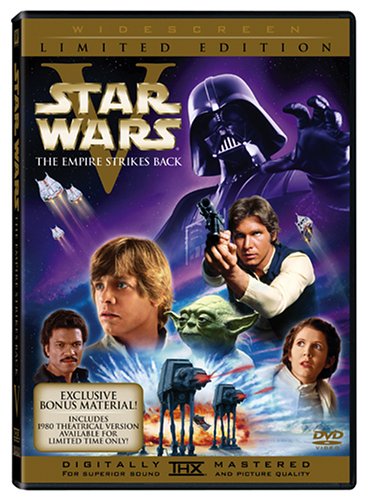 For the first time ever and for a limited time only, the enhanced versions of the Star Wars: Episode IV A New Hope, Star Wars: Episode V The Empire Strikes Back and Star Wars: Episode VI Return of the Jedi will be available individually on DVD. Plus, these 2-Disc DVD’s will feature a bonus disc that includes, for the first time ever on DVD, the original films as seen in theaters in 1977, 1980 and 1983.
The 2006 limited-edition two-disc release of The Empire Strikes Back is not only the first time the movie has been officially available by itself on DVD. It marks the first-ever DVD release of Empire as it originally played in theaters in 1980. What does that mean exactly? The film is without the various “improvements” and enhancements George Lucas added for the theatrical rerelease in 1997 as well as the DVD premiere in 2004. So no more of Ian McDiarmid (the Emperor) replacing Clive Revill with slightly revised lines, or Temuera Morrison rerecording of Boba Fett’s minimal dialogue.

What do you lose by watching the 1980 version? Dolby Digital 5.1 EX sound, for one thing (only 2.0 Surround here), and digital cleanup. But for home-theater owners, the biggest frustration will be from the non-anamorphic picture. On a widescreen TV, an anamorphically enhanced (16×9) picture at a 2.35:1 aspect ratio will fill the screen with the exception of small black bars on the top and bottom. The original edition of Empire, however, on a widescreen TV will have large black bars on the top, the bottom, and the sides unless you stretch the picture (and distort it in the process, especially considering the substandard picture quality). If you’re watching on a standard square-shaped (4:3) TV, though, you won’t notice a difference.

Yes, it’s true that serious home-theater lovers who want spectacular sound and anamorphically enhanced picture can always watch the 2004 version of the movie also included in this set. But chances are good that they already picked up the trilogy edition of all three films, so their decision to buy the 2006 two-disc edition depends on how much they want the original film. The official LucasFilm stance is that this is an individual release of the 2004 version of The Empire Strikes Back, and the 1980 version of the film is merely a “bonus feature.” Common speculation is that the only reason the original versions are seeing the official light of day at all is to undercut the booming black market for the laserdisc version. Star Wars fans will have to decide for themselves if that’s worth the purchase. –David Horiuchi