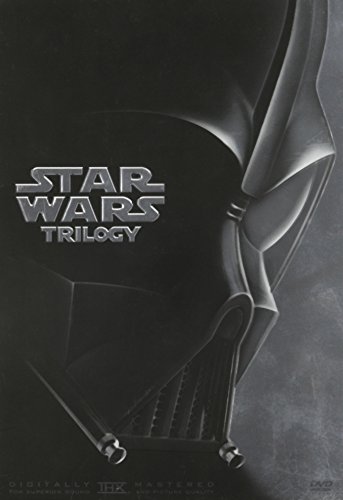 * “Empire of Dreams: The Story of the Star Wars Trilogy,” the most comprehensive feature-length documentary ever produced on the Star Wars saga, and never-before-seen footage from the making of all three films
* Featurettes: The Legendary Creatures of Star Wars, The Birth of the Lightsaber, The Legacy of Star Wars
* Teasers, trailers, TV spots, still galleries
* Playable Xbox demo of the new Lucasarts game Star Wars Battlefront
* The making of the Episode III videogame
* Exclusive preview of Star Wars: Episode III

Was George Lucas’s Star Wars Trilogy, the most anticipated DVD release ever, worth the wait? You bet. It’s a must-have for any home theater, looking great, sounding great, and supplemented by generous bonus features.

The Star Wars Trilogy had the rare distinction of becoming a cultural phenomenon, a defining event for its generation. On its surface, George Lucas’s story is a rollicking and humorous space fantasy that owes debts to more influences than one can count on two hands, but filmgoers became entranced by its basic struggle of good vs. evil “a long time ago, in a galaxy far, far away,” its dazzling special effects, and a mythology of Jedi knights, the Force, and droids. Over the course of three films–A New Hope (1977), The Empire Strikes Back (1980), and Return of the Jedi (1983)–Luke Skywalker (Mark Hamill), Princess Leia (Carrie Fisher), and the roguish Han Solo (Harrison Ford) join the Rebel alliance in a galactic war against the Empire, the menacing Darth Vader (David Prowse, voiced by James Earl Jones), and eventually the all-powerful Emperor (Ian McDiarmid). Empire is generally considered the best of the films and Jedi the most uneven, but all three are vastly superior to the more technologically impressive prequels that followed, Episode I, The Phantom Menace (1999) and Episode II, Attack of the Clones (2002).

How Are the Picture and Sound?

In a word, spectacular. Thanks to a new digital transfer, you’ve never seen C-3PO glow so golden, and Darth Vader’s helmet is as black as the Dark Side. And at the climactic scene of A New Hope, see if the Dolby 5.1 EX sound doesn’t knock you back in your chair. Other audio options are Dolby 2.0 Surround in English, Spanish, and French. (Sorry, DTS fans, but previous Star Wars DVDs didn’t have DTS either.) There have been a few quibbles with the audio on A New Hope, however. A few seconds of Peter Cushing’s dialogue (“Then name the system!”) are distorted, and the music (but not the sound effects) is reversed in the rear channels. For example, in the final scene, the brass is in the front right channel but the back left channel (from the viewer’s perspective), and the strings are in the left front and back right. The result feels like the instruments are crossing through the viewer.

What’s Been Changed?
The rumors are true: Lucas made more changes to the films for their DVD debut. Hayden Christensen (Anakin Skywalker) has been added to a scene in Jedi, Ian McDiarmid (the Emperor) replaces Clive Revill with slightly revised lines in Empire, Temuera Morrison has rerecorded Boba Fett’s minimal dialogue, and some other small details have been altered. Yes, these changes mean that the Star Wars films are no longer the ones you saw 20 years ago, but these brief changes hardly affect the films, and they do make sense in the overall continuity of the two trilogies. It’s not like a digitized Ewan McGregor has replaced Alec Guiness’s scenes, and the infamous changes made for the 1997 special-edition versions were much more intrusive (of course, those are in the DVD versions as well).

How Are the Bonus Features?

Toplining is Empire of Dreams: The Story of the Star Wars Trilogy, a 150-minute documentary incorporating not only the usual making-of nuts and bolts but also the political workings of the movie studios and the difficulties Lucas had getting his vision to the screen (for example, after resigning from the Directors’ Guild, he lost his first choice for director of Jedi: Steven Spielberg). It’s a little adulatory, but it has plenty to interest any fan. The three substantial featurettes are “The Characters of Star Wars” (19 min.), which discusses the development of the characters we all know and love, “The Birth of the Lightsaber” (15 min.), about the creation and evolution of a Jedi’s ultimate weapon, and “The Force Is with Them: The Legacy of Star Wars” (15 min.), in which filmmakers such as Peter Jackson, Ridley Scott, and James Cameron talk about how they and the industry were affected by the films and Lucas’s technological developments in visual effects, sound, and computer animation.

The bonus features are excellent and along the same lines as those created for The Phantom Menace and Attack of the Clones. Each film has a commentary track, recorded by Lucas, Ben Burtt (sound design), Dennis Muren (visual effects), and Carrie Fisher, with Irvin Kershner joining in on the film he directed, The Empire Strikes Back. Recorded separately and skillfully edited together (with supertitles to identify who is speaking), the tracks lack the energy of group commentaries, but they’re enjoyable and informative, with a nice mix of overall vision (Lucas), technical details (Burtt, Muren, Kershner), and actor’s perspective (Fisher). Interestingly, they discuss some of the 1997 changes (Mos Eisley creatures, the new Jabba the Hutt scene) but not those made for the DVDs.

There’s also a sampler of the Xbox game Star Wars: Battlefront, which lets the player reenact classic film scenarios (blast Ewoks in the battle of Endor!); trailers and TV spots from the films’ many releases; and a nine-minute preview of the last film in the series, Episode III, Revenge of the Sith (here identified by an earlier working title, The Return of Darth Vader). Small extra touches include anamorphic widescreen motion menus with dialogue, original poster artwork on the discs, and a whopping 50 chapter stops for each film.

“The Force Is Strong with This One”
The Star Wars Trilogy is an outstanding DVD set that lives up to the anticipation. There will always be resentment that the original versions of the films are not available as well, but George Lucas maintains that these are the versions he always wanted to make. If fans are able to put this debate aside, they can enjoy the adventures of Luke, Leia, and Han for years to come. –David Horiuchi
no scratches
3 movies