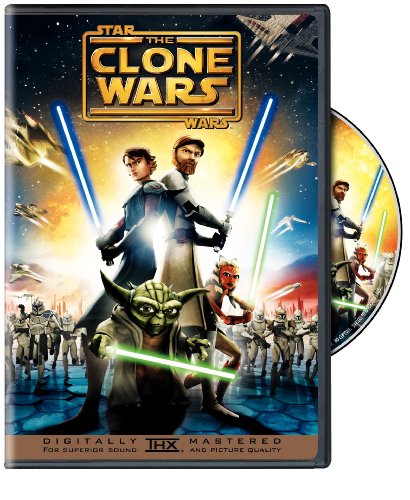 
The Clone Wars takes place between Star Wars Episode II: Attack of the Clones and Star Wars Episode III: Revenge of the Sith. Jedi Knights Anakin Skywalker and Obi-Wan Kenobi continue their journey across the galaxy amongst the Clone Wars, meeting up with familiar villains, such as Count Dooku, General Grievous and Asajj Ventress. The Grand Army of the Republic, led by Yoda, Mace Windu, Obi-Wan Kenobi, and other Jedi Knights, must fight the New Droid Army of the Separatists.
Star Wars: The Clone Wars is the 2008 CGI-animated theatrical film that serves as the kick-off to the weekly animated Clone Wars TV series. The concept came about way back in 1977’s original Star Wars film, when Leia says in her message to Obi-Wan Kenobi “Years ago, you served my father in the Clone Wars.” Initially a simple offhand reference that would reveal Luke’s past, the phrase captured fans’ attentions for years, until Episode II: Attack of the Clones revealed just how the Clone Wars figured into the battle between Republic and Empire. The 2008 movie is full of familiar characters–Anakin Skywalker, Obi-Wan Kenobi, Yoda, Count Dooku–and a new one: Ahsoka Tano, a young girl who has been made Anakin’s Padawan. Together, the two headstrong youths embark on a mission to rescue Jabba the Hutt’s kidnapped child, battling each other as much as they battle the Separatist forces. There are some kind-of-cool sequences, including duels with Dooku and his assassin, Asajj Ventress, and it’s interesting to see some new corners of the Star Wars universe, such as the seamy underbelly of Coruscant. But Ahsoka and her penchant for nicknames that are too cute to stomach seem aimed only at tween-age audiences, and for all that goes on in the movie, nothing really happens in the end. The 2003 animated Clone Wars microseries, which had the advantage of being directly tied into the live-action film series, had much more emotional bite.

At least some familiar voices return: Samuel L. Jackson (Mace Windu), Anthony Daniels (C-3PO, and still the only actor in every movie), Christopher Lee (Dooku). Other voices include Matt Lanter (Anakin), Ashley Eckstein (Ahsoka), and James Arnold Taylor (Obi-Wan). But even the traditional opening crawl has been replaced by a narration more suited for Starship Troopers. Veteran Star Wars fans will probably want to see The Clone Wars–once–but it won’t take them long to discover that this Star Wars isn’t their Star Wars any more. –David Horiuchi