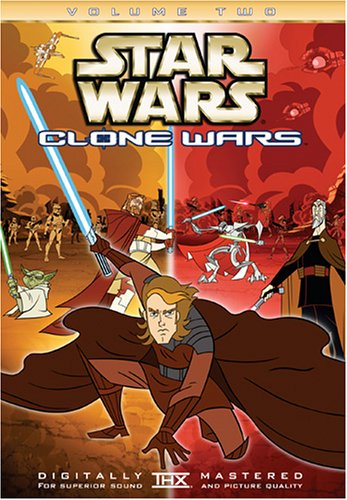 The Emmy Award-winning animated series continues with Star Wars: Clone Wars Volume Two, available for the first time on DVD. Directed by Genndy Tartakovsky, this series captures George Lucas’ vision in a dynamic animated style that is a visual delight for all ages. As seen on Cartoon Network, Star Wars: Clone Wars Volume Two concludes the epic adventures that bridge the story between Star Wars: Episode II Attack of the Clones and Star Wars: Episode III Revenge of the Sith. Witness firsthand the trials of Anakin Skywalker and the secret ceremony in which he becomes a Jedi Knight. Then, follow the Jedi as they attempt to repel a surprise attack by General Grievous, on the galactic capital, Coruscant. Clone Wars Volume Two is filled with exciting galactic battles that lead directly to the beginning of Revenge of the Sith.
Volume 2 of the stylish animated “microseries” Star Wars: Clone Wars picks up where volume 1 left off, with General Grievous threatening a group of Jedi. The war between the Republic and the Separatists continues to rage, and due to desperate need, Anakin Skywalker is bestowed the title of Jedi Knight, though he must undergo one final rite of passage by traveling to the frozen planet of Nelvan. The action is at its fiercest when the Separatists launch an overwhelming assault on Coruscant, and Masters Windu and Yoda get to show their stuff to defend the city. However, it’s just a diversion from the main goal: Grievious’s attempt to kidnap Supreme Chancellor Palpatine. In the series’ most dramatic moment, Shaak Ti and other Jedi try to fend off the droid’s attack. Clone Wars Volume 2 aired on the Cartoon Network in March 2005, and it’s a bit more substantial than volume 1, taking place in five 12-minute chapters (nos. 21-25) rather than 3-minute chapters. And while volume 1 was mostly flat-out action, the developments in volume 2 lead directly to the opening of Episode III, Revenge of the Sith. And you even get small tidbits such as C-3PO (again voiced by Anthony Daniels) unveiling his new gold look, Padme sporting a cinnamon-bun hairdo, and the reason why General Grievous has difficulty breathing. Let casual fans content themselves with the feature films; Clone Wars remains essential viewing for the Star Wars aficionado. (Rated Y7 for cartoon action and violence) –David Horiuchi

DVD features
In both a commentary track and a featurette, Genndy Tartakovsky and his creative team discuss the making of Clone Wars and how it ties into Episode III, Revenge of the Sith. If you’re not a fan of the Lego Star Wars, you might become one after you watch the amusing “Revenge of the Brick” trailer. There’s also the same Xbox demo of Battlefront II that was on the Sith DVD, and the Dolby 5.1 sound is an improvement over volume 1’s 2.0 Surround. –David Horiuchi