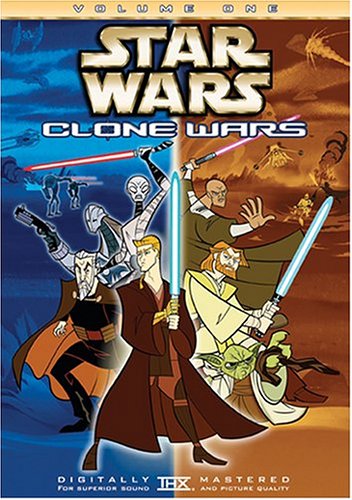 The saga continues with the Emmy-winning “Star Wars: Clone Wars,” available for the first time ever on DVD. This animated micro-series, directed by Genny Tartakovsky, captures George Lucas’ vision in a dynamic animated style that is a visual delight for all ages. “Star Wars: Clone Wars” Volume One reveals the epic adventures that bridge the story arc between Star Wars: Episode II Attack of the Clones and Star Wars: Episode III Revenge of the Sith. Follow the valiant Jedi Knights and the brave soldiers of the Republic’s clone army as they battle against the droid forces of the Separatists, led by the evil Sith Lord, Count Dooku. Witness the battles that made galactic heroes out of Anakin Skywalker and Obi-Wan Kenobi, and along the way get a first look at the new menace from Episode III, General Grievous. This is a must-have for any Star Wars DVD collection.
Make no mistake, Clone Wars is honest-to-goodness authentic Star Wars. The animated “microseries” takes place between Episode II, Attack of the Clones and Episode III, Revenge of the Sith. If the feature films cover the beginning and end of the war, Clone Wars depicts the actual battles and events that made heroes into legends. Don’t expect too much character development, as the episodes tend to be driven more by flat-out action than by dialogue (which can be a good thing, considering some Star Wars dialogue). We see such familiar faces as Obi-Wan Kenobi, Yoda, and Mace Windu in combat, and we meet the elite ARC (Advanced Recon Commandos) clone troopers plus new Jedi–the amphibious Kit Fisto and two women, Luminara Unduli and Barriss Offee. We also see a little more development of Anakin–showing off the best pilot skills in the army, defying Obi-Wan, and engaging in a deadly duel with Sith apprentice Asajj Ventress. But just when it’s clear that the Separatist droid armies are no match for a Jedi, the tide begins to turn with the introduction of the menacing General Grievous, who plays a crucial part in Episode III. The cast mostly consists of veteran voice actors, but Anthony Daniels does appear as C-3PO.

Clone Wars was created by Genndy Tartakovsky, whose resume includes such stylish series as Samurai Jack, Dexter’s Laboratory, and The Powerpuff Girls, and the program won a 2004 Emmy for Outstanding Animated Program (For Programming One Hour or More). These 20 episodes, which played on the Cartoon Network (and were originally designated seasons 1 and 2), can be viewed as a seamless 69-minute whole or as individual chapters. DVD features include two commentary tracks, a making-of featurette, video game and Episode III trailers, and an Xbox playable demo of the stealth game Republic Commando. If you’re a fan who can’t wait for Episode III, Clone Wars is essential viewing. –David Horiuchi