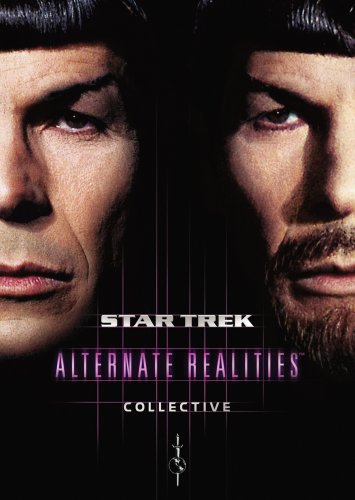 Available for the first time on DVD is a collection featuring the bizarre and strange of episodes of Star Trek! See your favorite characters behaving contrary to type in familiar but odd circumstances in Star Trek: Alternate Realities, a 5-disc fan-collective that includes 20 episodes selected from all five Star Trek television series plus exclusive special features.
Star Trek Collective: Alternate Realities is the sixth entry in the Star Trek: Fan Collective series (but not named as such, presumably because these episodes weren’t selected by fan vote), and it’s a good one. The categorization can be a bit random and anyone could argue about the selections, but it’s a good all-around sampler collection from all five live-action series with some all-time-classic episodes (sorry, no Animated Series here, though “Yesteryear” or “The Counter-Clock Incident” would have fit). It starts with six episodes from the “Mirror Universe,” in which crew members become their psychological opposites and Spock has a beard in “Mirror, Mirror,” and in which Deep Space 9 (“Crossover,” “Through the Looking Glass,” “Shattered Mirror”) then Enterprise (“In a Mirror Darkly, Parts 1 and 2,” melding the Original Series‘ “Mirror, Mirror” and Tholian Web episodes) made memorable visits. The next category is “Parallel Dimensions,” and in the Original Series episode “The Alternative Factor,” Kirk meets two different versions of Lazarus. That’s followed by the final-season Next Generation episode “Parallels,” in which Worf bounces back and forth among various crew scenarios. The third category, “Twisted Realities,” finds two contrasting-personality versions of Kirk in “The Enemy Within” and then his body is taken over by Janice Lester in the final episode of the Original Series, “Turnabout Intruder.” That’s followed by TNG‘s “Frame of Mind,” in which Riker seems to jump between the ship and a mental hospital, and “Shattered,” in which Chakotay experiences numerous stages of Voyager‘s past.

The final category, “Alternate Lives,” has the most episodes (though, oddly, none from the Original Series). It starts with two TNG episodes, “Yesterday’s Enterprise” (the highly regarded journey to a militarized Enterprise) and “The Inner Light” (Picard imagining himself leading a “normal” life) and “The Visitor” (also very highly regarded) from DS9 in which a grown-up version of Sisko’s son, Jake, grew up without his father. In Voyager‘s “Before and After,” Kes appears to be jumping backward through time, in “Timeless” Chakotay and Paris go back in history to try to repair a past mistake, and all the crew discovers they’re duplicates in “Course: Oblivion.” Enterprise closes the set with two episodes: “E2,” in which Archer is confronted by descendants of the ship’s crew, and “Twilight,” in which Archer finds himself 12 years in the future with the human-Xindi conflict now over. Extra material includes a 5- to 15-minute featurette on each theme (two each for the “Mirror Universe” and “Alternate Realities”) of new interviews with the producers and writers of the episodes plus some archival interviews (indicated by the footage appearing in a different frame) and one new commentary track per disc. –David Horiuchi