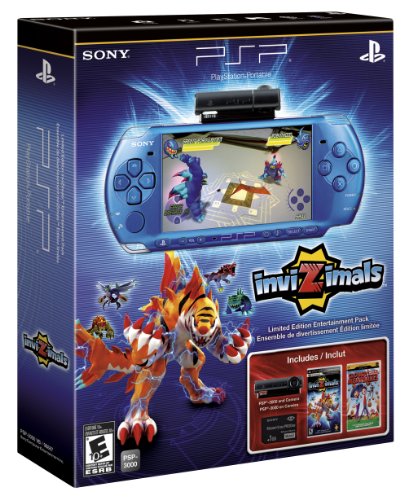 Utilize the multimedia power of the PSP to surf the Web, listen and store music, watch movies and download PlayStation Network content
Use the PSP Camera to hunt down invisible monsters and capture them, as well as take pictures and make short movies
Pit your InviZimals against each other or enjoy multiplayer fights with friends


Invizimals turns your PSP system into a device that lets you discover and capture the monsters living in the world around you. The excitement of capturing hidden monsters and uncovering their secret world is literally in your hands.

The PlayStation Portable (PSP) Limited Edition InviZimals Entertainment Pack brings together the latest revision in the PlayStation Portable hardware line, with the augmented reality video game, InviZimals. Designed for youthful fans of action that also have an eye for color, the bundle contents include the stunning Vibrant Blue version of the PSP-3000 system, a copy of InviZimals in UMD format, the PSP camera peripheral (required for play of InviZimals), a voucher for a downloadable copy of the animated feature Cloudy with a Chance of Meatballs, a 1GB Memory Stick PRO Duo and more. Toss in the media rich features of the PSP-3000, including Wi-Fi access to the Internet and the PlayStation Store, music, movie and Skype functionality, a built-in microphone, a brighter screen and the ability to play games and movies in digital and UMD format and you have a handheld gaming bundle suited to any player.

Then raise, train and level them to be used in battle.
View larger. 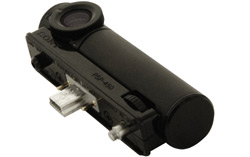 Monsters in Plain View in InviZimals

InviZimals turns your PSP, with the included game camera, into a device that lets you discover and capture the monsters living in the world around you. Framed by a story revolving around a fictional PSP research and development team, players must work with in-game mentors to learn the correct techniques for capturing monsters, then raise, train and level them up for use in wireless battles against a friend either via ad-hoc or infrastructure connection. The excitement of capturing hidden monsters and uncovering their secret world is literally in your hands. Features include: over 100 types of inviZimals, a range of different in-game power elements to discover, in-game power-ups and more.

In addition to being the conduit through which the InviZimals gameworld comes to life, the PSP camera is also a valuable peripheral in and of itself. The camera is rated at 0.3 megapixels, taking photographs at a maximum resolution of 640×480 and video at up to 480×272 at 30 fps. It has a wide-angle F2.8 lens that swivels to point at the user or away, has standard and macro recording modes and a microphone feature compatible with some software voice recording releases. This makes it perfect for taking pictures, making short movies and perhaps additional game and video uses.

Cloudy with a Chance of Meatballs Downloadable PSP Movie

A joint production by Columbia Pictures and Sony Pictures, the 2009 animated feature Cloudy with a Chance of Meatballs is the most delicious event since macaroni met cheese. Inspired by the beloved children’s book of the same name, the film focuses on the adventures of “Flint,” a young, well-meaning inventor who develops a machine designed to transform water into food. Unfortunately, things go awry, with all kinds of food falling from the sky like rain. The result is a boone for some, but threatens the very town Flint hoped to help. The feature contains the voice talents of Bill Hader, Anna Faris, James Caan, Bruce Campbell, Andy Sandberg and Mr. T.

With 1GB of memory, the compact Memory Stick PRO Duo included with this bundle allows you to save your PlayStation Network downloads, as well as store your videos, photos, music and more.

The latest PlayStation Portable revision, the PSP-3000, has everything the older PSPs had but now includes a built-in microphone, which lets you take advantage of voice features in some games as well as the PSP’s built-in Skype functionality without having to use a headset. The PSP-3000 also includes an improved anti-reflective screen that offers higher contrast and clearer visibility in well-lit places and can even be used outdoors.

A Full Entertainment System in Your Hands

The PSP was designed to handle all varieties of applications and entertainment — music, video, communication, wireless networking, and, of course, gaming. Users will enjoy topnotch 3D games with high-quality, full-motion video, and high-fidelity audio. The 4.3-inch wide screen display is bright and beautiful, and works well under many different lighting conditions. If you prefer, you can also connect your PSP to your TV. The PSP utilizes the Universal Media Disc (UMD) for commercially stored media, each of which holds 1.8 GB of data. It can also be used to download content digitally to PRO Duo memory sticks from the PlayStation Network.

Hundred of Games to Choose From

The PSP gaming library is hundreds of titles strong and covers a wide variety of genres. Whether you are seeking the hard hits of football, the strategy of a puzzle game, or anything in-between there’s sure to be many games for you. The PSP is capable of graphics quality that is comparable to the PlayStation 2, but in a pocket-sized package that you can take wherever you go.

Listen to Your Music Collection Anywhere

With the ability to play MP3, WAV, WMA, ATRAC3+, and MP4 files, you can easily use your PSP as an audio player. Simply place your music on a Memory Stick Duo, and you can navigate your collection using the PSP’s XMB (XrossMediaBar) to select your song to play.

With the PSP, you can show a slideshow of your photo collection with your friends by simply placing them on a Memory Stick Duo and accessing them via PSP’s XMB. Additionally, you can beam photos wirelessly to friends who also have a PSP via the device’s ad-hoc wireless connection.

With built-in Wi-Fi you can access the Internet from any accessible hotspot. Once connected, you can surf the Web and download exclusive demos and content for your PSP from the PlayStation Store. Wi-Fi functionality also allows you to battle other gamers, both over the Internet and in your local vicinity (ad-hoc).

What’s in the Box

Utilize the multimedia power of the PSP to surf the Web, listen and store music, watch movies and download PlayStation Network content
Use the PSP Camera to hunt down invisible monsters and capture them, as well as take pictures and make short movies
Pit your InviZimals against each other or enjoy multiplayer fights with friends
Learn new attacks, power up, and evolve your InviZimals
Trade InviZimals and magical items with your friends or online