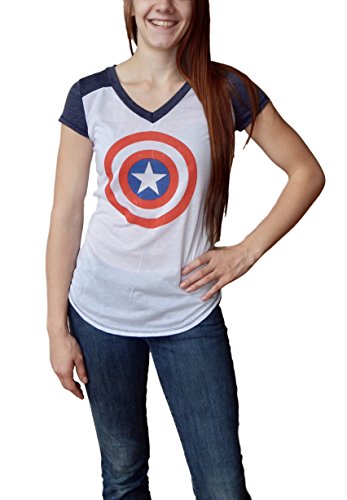 Captain America is the First Avenger and the leader of the Avengers. He started out as Steve Rogers, a humble frail man from Brooklyn who was transformed into super-soldier with a nearly indestructible shield that he throws at foes. He was enhanced to the peak of human perfection by an experimental serum to aid the United States government’s efforts in World War II and battled against Red Skull before becoming trapped in the ice for generations, emerging in present day to team with the likes of Iron Man, the Incredible Hulk, Thor, Hawkeye, and Black Widow. Patriotic and honorable, wearing a costume that bears an American flag motif, Cap is one of our favorite superheroes of all of Marvel Comics. This soft t-shirt features a distressed athletic look for Captain America. So comfortable and awesome for the anyone who LOVE being on Team Captain!
Fitted Junior’s sizes. For a looser fit, order 1-2 sizes larger than you normally would.
Officially Licensed Marvel Comics apparel
Features the classic Captain America logo on a comfortable athletic style V-neck shirt
Perfect for fans of Captain America and the Avengers
The most patriotic of superheroes. Perfect to wear on the 4th of July.