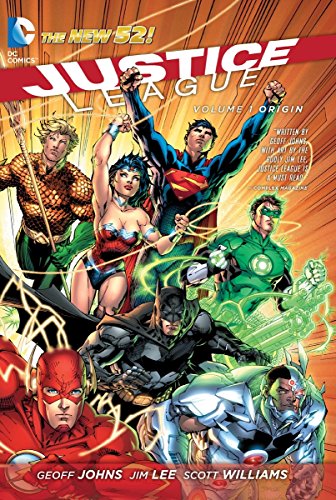 As a part of the monumental DC Comics—The New 52 event, comics superstars Geoff Johns and Jim Lee bring you an all-new origin story for the Justice League!

In a world where inexperienced superheroes operate under a cloud of suspicion from the public, loner vigilante Batman has stumbled upon a dark evil that threatens to destroy the earth as we know it. Now, faced with a threat far beyond anything he can handle on his own, the Dark Knight must trust an alien, a scarlet speedster, an accidental teenage hero, a space cop, an Amazon Princess and an undersea monarch. Will this combination of Superman, The Flash, Cyborg, Green Lantern, Wonder Woman and Aquaman be able to put aside their differences and come together to save the world? Or will they destroy each other first?

In one of the most game-changing titles in comic industry history, Geoff Johns and Jim Lee re-imagine the classic heroes of the DC Universe for the 21st century. This volume collects issues #1-6 of Justice League, part of the DC Comics—The New 52 event.

Geoff Johns: This has been a tremendous opportunity to go back and look at the central core of the characters, the directions they’ve gone in over the years and the new takes we can bring to them. For me, the Justice League had become too much of a tight knit unit. Their relationships became nearly interchangeable, and in a team dynamic that is extremely dull. What conflicts would come out of their different personalities and approaches to these larger-than-life problems? How would the world’s greatest super heroes really form a team? Their relationships are vastly different with one another and will continue to be.

Jim Lee: It’s been incredible to see so many people coming together and be a part of this fresh, new direction to move our characters forward for, what we hope, will be a new generation of fans. These are characters that have been around for many, many decades and you shouldn’t feel scared to be changing that up because otherwise they’re just going to ossify and become relics of the past, as opposed to something living and breathing in the present.

Q: How are you balancing making these stories and characters feel fresh and new while still respecting what came before?

GJ: You always want to remain true to the core essentials of the characters that have made them connect with generation after generation, but at the same time you want to take chances. You want to do something that hasn’t been done. For me personally, I want to explore mythologies and villains and new elements that are introduced alongside the world’s famous characters.

Q: What would you say defines the character you are working on?

GJ: Their central concept, which is an emotionally driven one. I’m surprised by how many super heroes seem to lack believable motivation and, in comics, are often ill-defined. What does the character want? And how does that relate to the bigger story at hand? And how can I connect to that? That’s what defines the character for me. Their powers, worlds and enemies should all be an extension of that.

Q: What stories or creators inspire you most when working on your character?

GJ: I’m inspired by anything that I connect to emotionally and, in the case of super heroes, that I cheer for.

Q: So what do you consider to be your character’s definitive stories?

GJ: That’s up to the audience to decide. Sinestro Corps became one because it connected with so many readers.

Q: With over 75 years of stories, is it difficult discovering new ideas and places for these characters to go that haven’t already been done?

GJ: Surprisingly, there’s always more stories to come from these characters–that’s what makes them great.

Q: What would you say is the difference in approach between writing and dialoguing the characters of The New 52 versus their previous incarnations?

GJ: I don’t want anything to be taken for granted. I don’t want the Justice League to be the worked-together-and-friends-for-life characters that they’ve been. So approaching them in a different way, as people first and heroes second, is what I’ve been doing.

Q: Jim, what’s it like working together with Geoff on Justice League? What about his writing do you think compliments your art?

JL: Geoff’s energy jumps off the script and while he’s known for his in-depth history of the rich DC Universe, it’s his focus on character and the interpersonal quirks that really make it fun working on DC’s trademark superteam. I get a big kick out of drawing their first interactions and more human aspects on the page, including a sense of humor and fun amidst this amazing roller-coaster ride of explosions, derring-do and heroics. At the end of the day, it’s this journey you didn’t expect that keeps people excited about comics!

Q: Jim, you’ve been involved with two of the biggest comic launches in comics history, X-Men No. 1 and Justice League No. 1. What’s it like for you making such huge marks in the industry? Are they similar in any way?

JL: It’s great! I think any artist wants to reach the widest audience possible for their work, so it’s always gratifying to work on a project that captures a lot of fan attention and be considered a huge success. That instant feedback online and meeting fans at conventions is always a rush that fuels me to keep drawing late into the night. Justice League was part of a much larger effort, so it’s even more rewarding to see the whole relaunch resonate with fans in a huge way!