Injustice: Gods Among Us: Year Two The Complete Collection 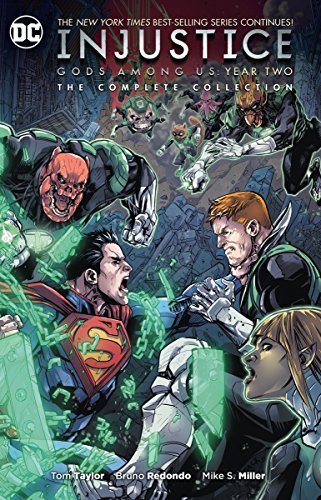 Injustice: Gods Among Us: Year Two The Complete Collection


The second year of the graphic novel prequel to the best-selling video game phenomenon is collected in its entirety for the first time ever!

Superman was the Earth’s greatest hero. But he couldn’t protect his home, his wife or his parents from the Joker or untimely death. Now he’s decided that the only route to peace on his adopted planet is to remove anything—and anyone—who instigates conflict. He began by putting a fist through the Joker’s chest, and he hasn’t become any calmer.

Meanwhile, Batman believes that no matter what the crime, everyone deserves a fair trial. Now he’s leading a resistance force against his former friend’s authoritarian world government. The Green Lantern Corps have noticed the drastic wrongs being committed in that sector, and are on their way to intervene. But Superman has an important question for them: Why did they allow Krypton to die?

As action-packed as the video game phenomenon that inspired it, INJUSTICE: GODS AMONG US: YEAR TWO—THE COMPLETE EDITION tells the story of a world gone mad, and the godlike men and women who seek to set it on the right track in what they think is the best way. Written by Tom Taylor (EARTH 2) with art by Jheremy Raapack (RESIDENT EVIL), Mike S. Miller (A Game of Thrones) and more, this graphic novel collects the second year of the best-selling series in its entirety for the first time.