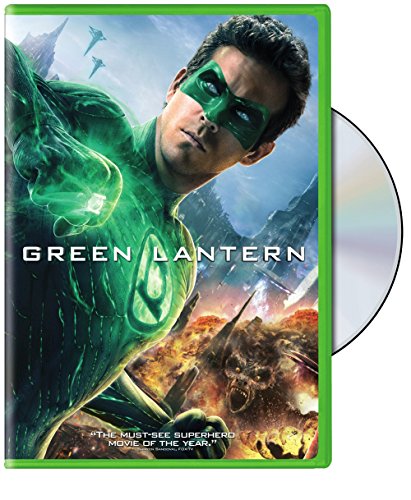 In a universe as vast as it is mysterious, an elite force of protectors for peace and justice has existed for centuries. They are the Green Lantern Corps. When a new enemy called Parallax threatens to destroy the Universe, their fate and the fate of Earth lie in the hands of the Corps’ newest recruit, the first human ever selected: Hal Jordan (Ryan Reynolds). Bringing the popular superhero to the big screen for the first time, Green Lantern also stars Blake Lively (Gossip Girl), Peter Sarsgaard (Orphan), Mark Strong (Sherlock Holmes), Academy Award® nominee Angela Bassett* and Academy Award® winner Tim Robbins**.
As far as superheroes go, Green Lantern may lack the clean, iconic lines of his more respectable DC counterparts Superman and Batman, but the very wonkiness of the premise (earthling joins elite force of space cops) lends itself to a pulpy, operatic, not-entirely-serious approach. (One of his teammates is a talking carrot, after all.) Capitalizing on a charming performance by Ryan Reynolds, the feature-film adaptation is a big, messy movie that, at its best, generates a feeling of aw-shucks wonder. Much like Thor, it isn’t afraid to loosen up on the inner turmoil of its hero and go macro. Based on comic writer Geoff Johns’s retrofitting of the title character, the story follows Hal Jordan (Reynolds), an impulsive test pilot whose encounter with a dying alien leaves him with an energy ring capable of weaponizing his imagination. While struggling to master his will-based powers, he must deal with threats both earthbound (a hilariously nebbishy Peter Saarsgard, who may be the first supervillain to rock a hoodie) and galactic. Martin Campbell, a director who specializes in more down-to-earth heroics (Casino Royale,The Mask of Zorro), brings a pleasing matter-of-fact baseline to the proceedings, an approach that makes the increasingly outlandish effects truly feel special when they occur. Green Lantern has its debits, certainly–the lack of a memorable theme, a second act that hems and haws before getting to the action, the standard origin story shoehorning in too many secondary plots–but its final scenes succeed on a Gigantor, cosmic level where most superhero movies fear to tread. The bigger it goes, the more goofily enjoyable it gets. –Andrew Wright