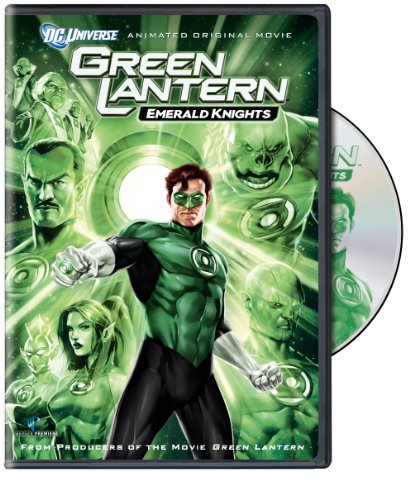 An anthology of 6 tales that show Hal Jordan and the Green Lanterns policing the galaxy a la “Gotham Knights.”
A crash course in all things Green Lantern is offered in Emerald Knights, a DC Universe Animated Original feature that details the history of Hal Jordan and his Green Lantern Corps cohorts in an engaging and action-packed anthology film. Taking its cue from 2008’s Batman: Gotham Knight, Emerald Knights spins the origin stories for Jordan and four pioneer members of the corps–Kilowog, Laira, Mogo, and Abin Sur–as a sort of inspiration for newly minted member Arisia (whom longtime GLC fans will know as Arisia Rrab) before she joins them in battle against the exiled scientist turned pure energy being Krona, who poses a threat to the entire universe. The five stories, including that of Jordan joining the corps, hew closely to the original source material, thanks to the presence of writers like DC Comics’ chief creative officer Geoff Johns, fellow Green Lantern writers Peter J. Tomasi and Eddie Berganza, Dave Gibbons (Watchmen), and Marc Guggenheim and Michael Green, who penned the live-action Green Lantern that will undoubtedly spur many viewers to seek out this feature. The stories are dramatic and well scripted, and avoid the clunky linking devices that plagued Gotham Knight, and the voice cast, led by fan favorite Nathan Fillion (Castle) as Hal Jordan and Elisabeth Moss (Mad Men) as Arisia, is solid, with contributions by Arnold Vosloo (The Mummy) as Abin Sur and Jason Isaacs (Harry Potter‘s Lucius Malfoy) as Sinestro among the highlights. The animation is also top-notch, with the interplanetary scenes rendered with an impressively cosmic sweep. Extras, however, are limited to sneak peeks of DCU’s All-Star Superman and Batman: Year One. –Paul Gaita