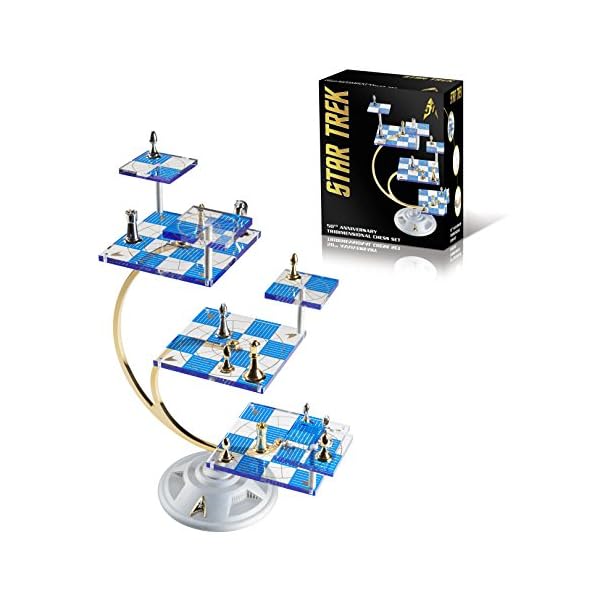 
The Star Trek Tridimensional chess set is bold, distinctive, eminently logical, and has everything you’ll need to start your intergalactic chess playing expedition. The 32 game pieces are precision cast and coated in sterling silver or 24 karat gold, with three main playing boards, and four moveable “attack boards”. It also comes complete with a specially designed collectible booklet containing the history of the game and the rules of play. It is a stunning showpiece, moving the Star Trek saga into a bold new dimension. This chess set, from the Franklin Mint, is being released in honor of the 50th anniversary of the Star Trek TV series. The release is also timed in conjunction with the anticipated film Star Trek Beyond, the 13th film in the 50 year Star Trek franchise, being released summer of 2016. Since its inception in 1964, Star Trek has captured the hearts and minds of fans eager for a brighter future. The series’ views and ideas have moved beyond the screen and inspired the world outside of Science Fiction. Since the debut of “Court Martial” fans have been fascinated with the Tri-dimensional chess set featured in the episode. There have been many pop culture references to it, including episodes of “The Big Bang Theory” and “Doctor Who”.
Star Trek Tridimensional Chess Set measures 14 inches tall when assembled
32 stunning pieces are precision cast: 16 coated with sterling silver; 16 coated with 24 karat gold
Features three main playing boards (4.25 inches) and four movable attack boards (2.13 inches)
Board is acrylic
Specially designed collectible booklet contains the history of the game and rules of play