Doctor Who: The Sontaran Experiment (Story 77) 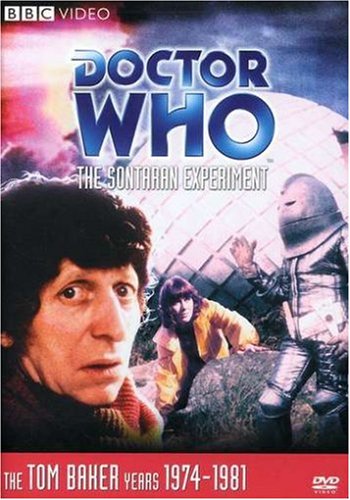 Doctor Who: The Sontaran Experiment (Story 77)

The Doctor (Tom Baker), Sarah Jane, and Harry return from the space station Nerva to Earth 10,000 years in the future. The desolate landscape that once was the site of Piccadilly Circus has become the testing ground for the human race.
One of the more suspenseful stories of the Tom Baker-era Doctor Who, 1975’s The Sontaran Experiment pits the Time Lord and his companions against a ruthless alien carrying out experiments on the survivors of a decimated Earth. The first Doctor Who serial to be shot entirely on location (in Dartmoor) and solely with video cameras, The Sontaran Experiment picks up where the previous serial, The Ark in Space, left off, with Baker’s Doctor, Sarah Jane Smith (Elisabeth Sladen) and Harry Sullivan (Ian Marter, who also wrote the serial’s novelization) visiting a future Earth abandoned by its inhabitants save for a small band of space colonists who are being hunted by an unseen force and its robot servant. The alien – a Sontaran warrior (the race was previously encountered in the Jon Pertwee serial The Time Warrior) – is capturing the colonists and subjecting them to horrifying medical and psychological experiments, and the Doctor and friends soon find themselves among its new test subjects. A short (only two episodes) but gripping and effective story, The Sontaran Experiment has received its share of positive and negative reviews from the fan community, but remains an entertaining entry from the Baker years. The single-disc DVD of The Sontaran Experiment offers surprisingly fewer extras than other recent Doctor Who releases; commentary is provided by Sladen, producer Philip Hinchcliffe, and co-writer Bob Baker, while a featurette, “Built for War,” traces the history of the Sontarans via interviews with Sladen, Baker, sixth Doctor Colin Baker, writer Terrance Dicks, and others. A brief photo gallery and the by-now standard production notes subtitle option round out the extras. — Paul Gaita