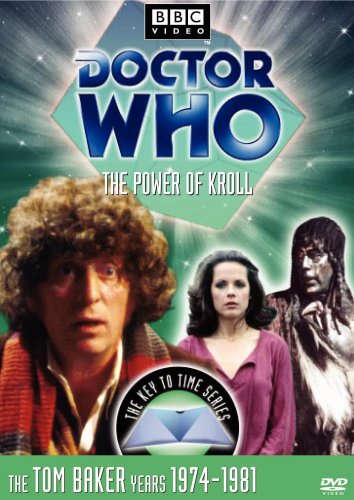 
The Power of Kroll is the fifth part of the “Key to Time” story arc, which comprised the whole of Doctor Who‘s 16th season. Like its five fellow serials in the arc, it’s engaging pulp science fiction laced with offbeat humor courtesy of Tom Baker’s eccentric performance as the Doctor. The search for the fifth segment of the Key to Time leads the Doctor and Romana (Mary Tamm) to the bayoulike moon of Delta Magna, where the “swampies”–the planet’s green-skinned original inhabitants–are on the brink of rebellion against a colony of hostile humans that have set up a refinery on their land. The swampies call upon their god, a monstrous octopoid known as Kroll, to avenge them, which presents a considerable obstacle in the Doctor’s search for the segment. Hampered by technical and behind-the-scenes setbacks (and the swampies’ ludicrous appearance), The Power of Kroll is a lesser but still satisfying entry in both the “Key to Time” story arc and the Baker episodes. –Paul Gaita