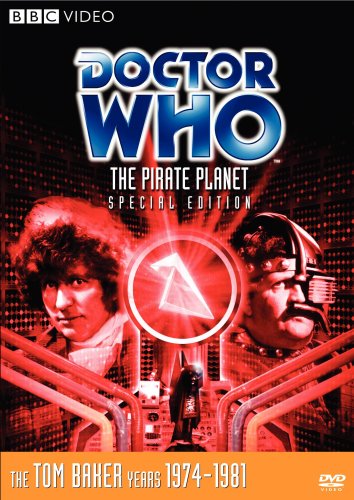 As the Doctor, Romana and K9 head for the planet Calufrax in search of the second segment of the Key to Time, they are in for a surprise when the TARDIS brings them to Zanak, an entirely different planet occupying the same space coordinates. Did Romana take a wrong turn when she navigated by the book? No, the tracer registers that the segment is near. Nothing is as it seems in this story by Douglas Adams (The Hitchhikers Guide to the Galaxy). The populace of Zanak lead affluent lives, thanks to the mysterious mechanizations of the Captain. He regularly announces a new age of prosperity, and most of the people accept the extraordinary turn in their fortune without further examination. Little do they imagine that their benefactor hidden on a forbidden mountaintop is a roaring space pirate whose best friend is Polyphase Avitron, a cyber-parrot that brings death to anyone who displeases its master. All these elements will come together to reveal the greatest crime in the galaxy and the second segment of the Key to Time as well.