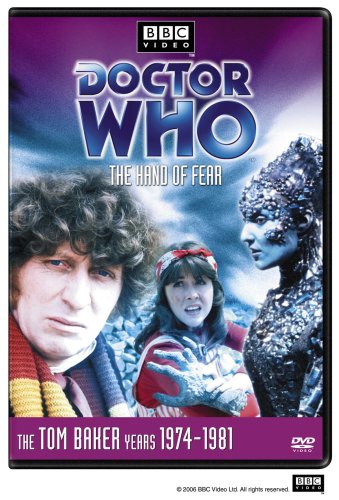 After a freak accident in the inevitable quarry, Sarah Jane emerges clutching a stone hand which holds a strange power over her.

]]>
Doctor Who fans must take the bittersweet with the suspenseful in this four-part story arc from 1976, which pits the Doctor (Tom Baker) and companion Sarah Jane Smith (Elisabeth Sladen) against the fossilized hand of an alien criminal which possesses a hideous will to live again. Discovered by the Doctor and Sarah during a trip to Earth that puts them in the middle of a mining blast, the hand belongs to Eldrad, a fugitive criminal from the planet Kastria who desires to regain his bodily form and return to his home. To do so, he possesses Sarah and the staff of a nearby nuclear reactor in order to use its power to regenerate, which leads to several eerie scenes with the reanimated hand that nicely evoke British horror features from the ’60s and ’70s. Well-liked by Baker-era fans, The Hand of Fear is best remembered as Sladen’s final turn as Sarah (though she has frequently returned to the role on both radio and TV), and her final scenes with Baker (largely written by the two actors) have an endearing sort of wistfulness.

As with all Doctor Who DVD releases, The Hand of Fear features a number of well-produced extras that flesh out the production history of the episodes. The commentary by Baker, Sladen, co-star Judith Paris (who plays the reconfigured Eldrad in an early female form), co-author Bob Baker, and producer Phillip Hinchcliffe is an excellent place to start for first-time viewers and longtime fans; all except Paris are also featured in an informative 50-minute featurette titled “Changing Time,” which illuminates the warm working relationship between Baker and Sladen, as well as her reasons for departing the series. An 11-minute videotape clip from the U.K. children’s show Swap Shop featuring Baker and Sladen before the broadcast of The Hand of Fear is also included, as well as the now-standard photo gallery, text-only commentary, and PDF of the 1977 Doctor Who Annual and Radio Times. –Paul Gaita
Brand Name: WHV Mfg#: 794051273123
Shipping Weight: 0.20 lbs
Manufacturer:
Genre:
All music products are properly licensed and guaranteed authentic.