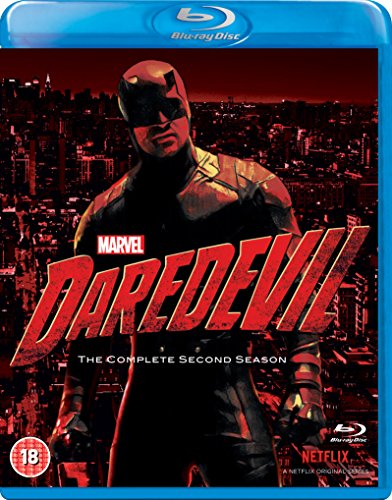 The razor-thin line between redemption and retribution explodes with a vengeance in Marvel’s Daredevil: The Complete Second Season. With Wilson Fisk behind bars, Matt thinks his efforts to bring order to Hell’s Kitchen are succeeding-until chaos reignites with two new arrivals: Frank Castle (a.k.a. The Punisher), an anguished ex-soldier determined to visit bloody, irrevocable “justice” upon his adversaries, and Matt’s volatile old flame Elektra Natchios. Meanwhile, a lethal, relentless source of ancient evil continues to amass power. Now, as both the stakes and the body count rise, Matt faces a lifealtering choice that forces him to confront what it truly means to be a hero. Episodes Bang Dogs To A Gunfight New York’s Finest Penny and Dime Kinbaku Regrets Only Semper Fidelis Guilty As Sin Seven Minutes In Heaven The Man In The Box 0.38 The Dark at The End of the Tunnel A Cold Day In Hell’s Kitchen