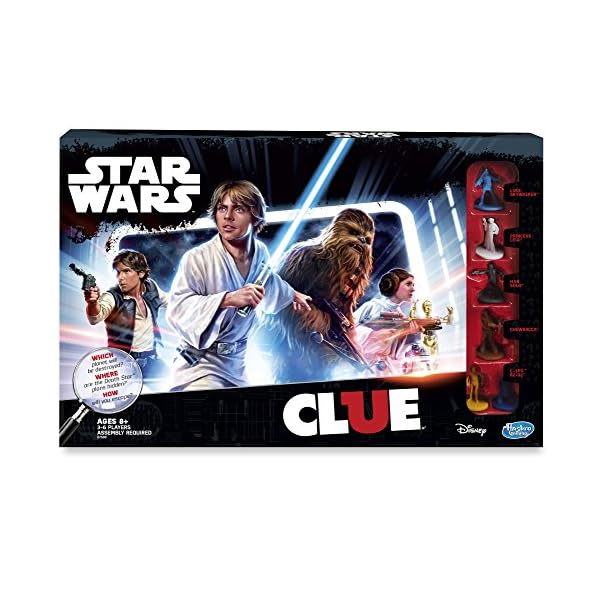 Play as Luke, Leia, Han, Chewbacca, R2-D2, or C-3PO
Save the Galaxy from destruction by the Empire
Figure out Darth Vader’s next target


It’s the Clue game transported to the world of Star Wars. In this game, it’s a period of civil war, and players have managed to sneak onto the Empire’s ultimate weapon, the Death Star! Be the first player to find out which planet Darth Vader plans to destroy next, which room the Death Star plans are hidden in, and which vehicle is the correct escape vehicle. The cards revealing the correct planet, room, and vehicle are placed in the mission folder at the beginning of the game — no one sees what these are until the end. The player who correctly identifies what’s in the folder wins! Star Wars products are produced by Hasbro under license from Lucasfilm Ltd. Hasbro Gaming and all related terms are trademarks of Hasbro.
Play as Luke, Leia, Han, Chewbacca, R2-D2, or C-3PO
Save the Galaxy from destruction by the Empire
Figure out Darth Vader’s next target
Find the secret plans to the Death Star
Steal the correct vehicle to escape
Includes 6 Star Wars character pawns, 5-piece cardboard gameboard (bottom level, back wall, 2 supporting walls, top level), mission notepad, die, 6 vehicle tokens, 6 planet tokens, mission folder, 21 Clue cards (red deck), 19 corridor cards (black deck), and game guide