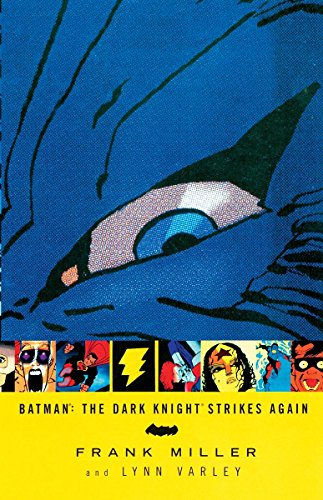 
It’s been three years since the events of The Dark Knight Returns, and everything is just fine.  At least on the surface.  What the world at large doesn’t know is that it’s a total sham.  A perfectly choreographed, pretty little world where everything that’s ugly, or even potentially disturbing, is all nicely wrapped up with neat little ribbons and swept under the carpet.  Only he knows better.  He’s watched it fester to near-breaking point, and it’s time for the only free man left who can effect any real change to bring it all down around their ears once and for all.

The Dark Knight returns once again with a vitality unseen since the first years of his war on crime.  Together with his army of Bat-soldiers, including Carrie Kelley—formerly Robin, and now the new Catgirl—the Dark Knight wages a new war on a diseased world that’s become completely lost.

The Dark Knight Strikes Again features appearances by such DC icons as Superman, Wonder Woman, Green Arrow, Martian Manhunter, the Atom, the Question and more.  But are they still the World’s Greatest Heroes or part of the conspiracy?

This incredible volume, designed by multiple award-winner Chipp Kidd, features a new introduction by Miller commenting on returning to the world he created fifteen years ago.  The book includes the complete 3-part story, plus numerous sketches and other never-before-seen material.
The Dark Knight Strikes Again is Frank Miller’s follow-up to his hugely successful Batman: the Dark Knight Returns, one of the few comics that is widely recognized as not only reinventing the genre but also bringing it to a wider audience.Set three years after the events of The Dark Knight Returns, The Dark Knight Strikes Again follows a similar structure: once again, Batman hauls himself out of his self-imposed retirement in order to set things right. However, where DKR was about him cleaning up his home city, Gotham, DKSA has him casting his net much wider: he’s out to save the world. The thing is, most of the world doesn’t realize that it needs to be saved–least of all Superman and Wonder Woman, who have become little more than superpowered enforcers of the status quo. So, the notoriously solitary Batman is forced to recruit some different superpowered allies. He also has his ever-present trusty sidekick, Robin, except that he is a she, and she is calling herself Catwoman. Together, these super-friends uncover a vast and far-reaching conspiracy that leads to the President of the United States (Lex Luthor) and beyond.

The Dark Knight Strikes Again is largely an entertaining comic, but much of what made The Dark Knight Returns so good just doesn’t work here. Miller’s gritty, untidy artwork was perfect for DKR‘s grim depiction of the dark and seedy Gotham City, but it jars a bit for DKSA, which is meant to depict an ultra-glossy, futuristic technocracy. Lynn Varley’s garish coloring attempts to add a slicker sheen, but the artwork is ultimately let down by that which worked so well for DKR–this time around, it just feels sloppy and rushed. The same is true of the book’s denouement, which happens so quickly that it leaves the reader reeling and looking for more of an explanation. Moreover, DKSA is packed full of characters who will mean little to those unfamiliar with the DC Comics universe (e.g., the Atom, the Elongated Man, the Question). Perhaps the book’s biggest failing is that where The Dark Knight Returns gave comic book fans a base from which to evangelize to theuninitiated, The Dark Knight Strikes Again is just preaching to the converted. Comic book superhero fans will find much to enjoy here, but others would be better off sticking with the original. –Robert Burrow