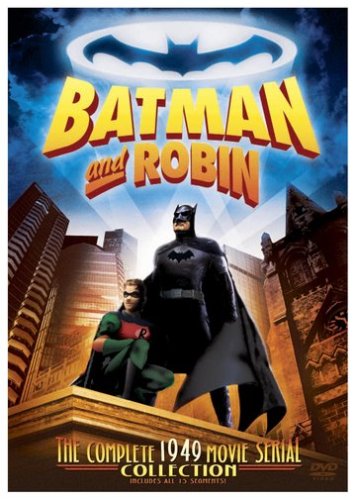 Robert Lowery, John Duncan, Lyle Talbot, Jane Adams. One of the most beloved serials of all time, this incarnation of the Dynamic Duo battled the villains of Gotham City one week at a time in the theaters! Includes all 15 episodes on 2 DVDs. 1949/b&w/4 hrs., 23 min/NR/fullscreen.
There’s no Batmobile, and Robert Lowery looks a bit, ahem, well-fed as the Caped Crusader, but Columbia Pictures’ 1949 black-and-white serial Batman and Robin is up to its cape and cowl in cliffhangers, crime capers, and good old-fashioned rock-em-sock-em action. Directed at a breakneck pace by serial vet Spencer Gordon Bennett, the Complete 1949 Movie Serial Collection‘s 15 episodes pits Lowery’s Batman and Johnny Duncan as the Boy Wonder against arch-villain The Wizard, who has designs on a remote-control device that doubles as a death ray. Jane Adams’s Vicki Vale is on hand to fall into peril at least once per episode, while Ed Wood regular Lyle Talbot looks on sternly as Commissioner Gordon. Viewers weaned on Tim Burton’s dark, sleek interpretation of the Batman mythos will undoubtedly groan over the creaky dialogue and performances (creator Bob Kane was no fan, either), but fans with designs on absorbing every bit of Bat-trivia possible will probably get a kick out of this well-intentioned attempt at bringing the Dark Knight’s adventures to screen. The episodes are divided onto two DVDs, which offer no extras. –Paul Gaita