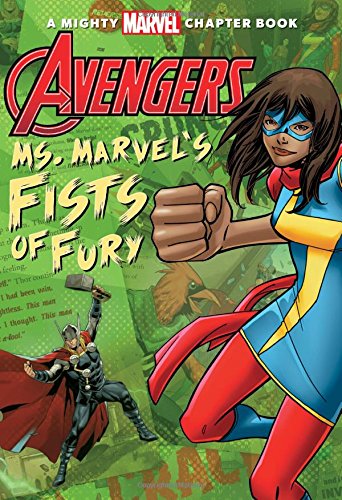 Ms. Marvel, a.k.a. Kamala Khan, is a teenage Muslim American from Jersey City, New Jersey. After being enveloped in Terrigen Mists, Kamala now has super powers, which she uses to stop villains, just like the heroes she idolizes.
Kamala Khan, aka Ms. Marvel, is in over her head. Juggling the life of a Super Hero and the life of a normal girl is a full-time job. So when an infestation of inhuman birds comes to town, Kamala ends up bombing a huge test because she is forced to defend Jersey City. But with the help of Thor, God of Thunder, Ms. Marvel will find the strength within herself to control her new powers and learn what it means to be Super. This teenage hero will uncover the creepy truth behind an army of annoying feathered foes and rediscover her inner warrior when she teams up with the mightiest hero of all in MS. MARVEL’S FISTS OF FURY!
ShareTweet