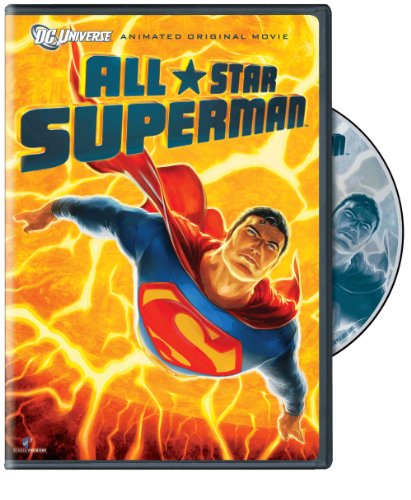 
Fueled by hatred and jealousy, Lex Luthor masterminds an elaborate plot to kill the Man of Steel – and it works. Poisoned by solar radiation, Superman is dying. With weeks to live, he fulfills his life’s dreams – especially revealing his true identity to Lois Lane – until Luthor proclaims his ultimate plan to control the world with no alien hero to stop him. Powers fading, Superman engages in a spectacular deadly battle with Luthor that could truly trigger the end of Earth’s Greatest Protector. This startling and gripping DC Universe Animated Original Movie stars the voice talents of James Denton, Anthony LaPaglia, Christina Hendricks and Ed Asner.
Based on the award-winning graphic novel series by Grant Morrison, this DC Universe Animated Original Movie posits the ultimate question for Superman fans–how would the Man of Steel spend his final days on Earth?–in a unique and genuinely thought-provoking feature film. Exposed to solar radiation by Lex Luthor (voiced by Anthony LaPaglia), Superman (James Denton) learns that he is dying, and devotes his remaining time to Lois Lane (Mad Men‘s Christina Hendricks), to whom he grants 24 hours of super powers. Their bittersweet finale is interrupted by a host of villains, including the Parasite and the supercomputer Solaris, as well as Luthor himself, who uses Superman’s own powers against his archenemy in one final battle. The action is plentiful and sprawling against a densely plotted backdrop, but what sets All-Star Superman apart from other DCU features is what made Morrison’s source material so special: how does one man–even one as invincible as Superman–seek to define his life and legacy? The late Dwayne McDuffie’s script addresses the subject in mature and fulfilling terms, while the vocal cast, which includes Ed Asner (as Perry White), Arnold Vosloo (Bar-El), and Frances Conroy (Martha Kent), present a range of performances that compare favorably to the Tim Daly/Dana Delaney-led cast of Superman: The Animated Series. The single-disc edition is light on extras, with only previews of DCU’s Green Lantern: Emerald Knights and Superman/Batman Apocalypse on the disc. –Paul Gaita